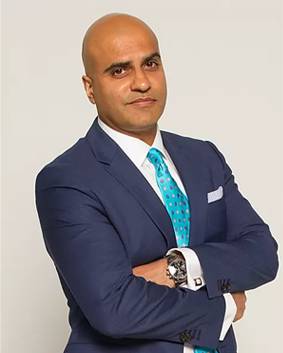 Nainesh holds a wealth of experience having appeared in trials with and without a jury at the Superior Court of Justice and the Ontario Court of Justice. He has represented clients and conducted appeals at the Federal Court level, Trial division. Nainesh has appeared before numerous Tribunal panels including; the Financial Services Commission and the Social Security Tribunal. He has been featured in several televised interviews on the subjects of Personal Injury and Long Term Disability claims.

Nainesh is active in the community and supports many worthy charities and causes. Each year he brings a thousand troops, veterans and cadets to a professional hockey game in a Remembrance Day event known as Kotak Law Military Appreciation Day.

Nainesh is a proud contributor and supporter of Wounded Warriors Canada and The Peel’s Children’s Centre.

Nainesh hosts the inductees to the Brampton Sports Hall of Fame annually at his box suite at a Brampton Beast hockey game.

Nainesh is on the Paralegal Course Advisory Committee for Sheridan College.

Nainesh lives in Mississauga with his wife Susan and their two boys ages 23 and 6, and 2-year-old daughter.